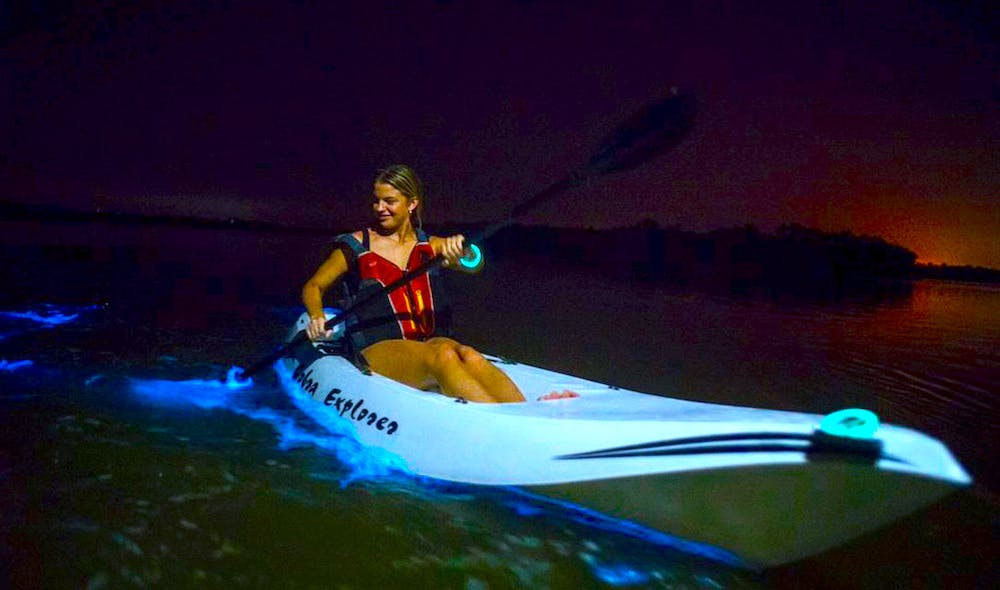 In a general sense, the principal chemical reaction in bioluminescence involves some light-emitting molecule and an enzyme, generally called the luciferin and the luciferase, respectively. Because these are generic names, the luciferins and luciferases are often distinguished by including the species or group, i.e. Firefly luciferin. In all characterized cases, the enzyme catalyzes the oxidation of the luciferin.

In some species, the luciferase requires other cofactors, such as calcium or magnesium ions, and sometimes also the energy-carrying molecule adenosine triphosphate (ATP). In evolution, luciferins vary little: one, in particular, coelenterazine, is found in eleven different animals (phyla), though in some of these, the animals obtain it through their diet. Conversely, luciferases vary widely between different species, and consequently, bioluminescence has arisen over forty times in evolutionary history.

Both Aristotle and Pliny the Elder mentioned that damp wood sometimes gives off a glow and many centuries later Robert Boyle showed that oxygen was involved in the process, both in wood and in glow-worms. It was not until the late nineteenth century that bioluminescence was properly investigated. The phenomenon is widely distributed among animal groups, especially in marine environments where dinoflagellates cause phosphorescence in the surface layers of water. On land, it occurs in fungi, bacteria and some groups of invertebrates, including insects.

The uses of bioluminescence by animals include counter-illumination camouflage, mimicry of other animals, for example, to lure prey, and signaling to other individuals of the same species, such as to attract mates. In the laboratory, luciferase-based systems are used in genetic engineering and for biomedical research. Other researchers are investigating the possibility of using bioluminescent systems for street and decorative lighting, and a bioluminescent plant has been created.

Bioluminescence occurs widely among animals, especially in the open sea, including fish, jellyfish, comb jellies, crustaceans, and cephalopod molluscs; in some fungi and bacteria; and in various terrestrial invertebrates including insects. About 76% of the main taxa of deep-sea animalsproduce light. Most marine light-emission is in the blue and green light spectrum. However, some loose-jawed fish emit red and infrared light, and the genus Tomopteris emits yellow light.

The most frequently encountered bioluminescent organisms may be the dinoflagellates present in the surface layers of the sea, which are responsible for the sparkling phosphorescence sometimes seen at night in disturbed water. At least eighteen genera exhibit luminosity. A different effect is the thousands of square miles of the ocean which shine with the light produced by bioluminescent bacteria, known as mareel or the milky seas effect.

Non-marine bioluminescence is less widely distributed, the two best-known cases being in fireflies and glow worms. Other invertebrates including insect larvae, annelids and arachnids possess bioluminescent abilities. Some forms of bioluminescence are brighter (or exist only) at night, following a circadian rhythm.

A manatee or stingray moves much slower underwater, giving a ghostly glow to the illumination. Swirl your kayak paddle or drop your hand into the water to create wild patterns of light. Any movement causes tiny dinoflagellates to emit light. Little is known about these under-appreciated creatures, but they are essential to the existence of most marine life. Tours are 90 minutes and are suitable for beginners. The best time to go is at the darkest hours of the night, five days before or after a new moon, or when the moon is not out at all.

For the best experience, join us on a kayak tour today!