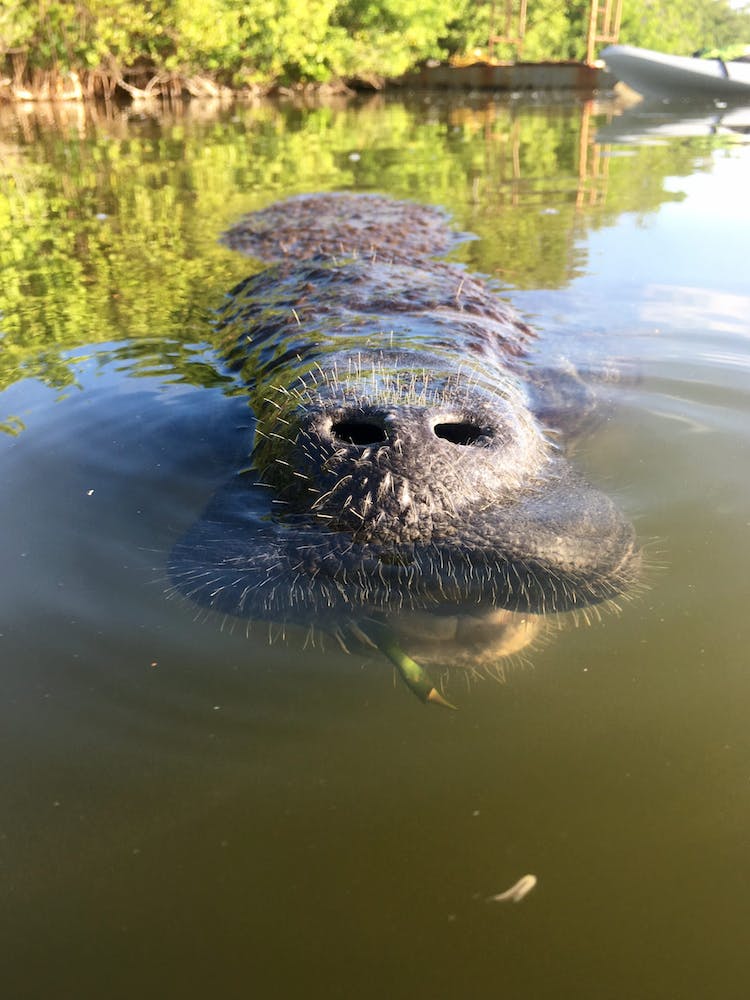 Note: Manatees are Out of season November 15 thru March 15

We are a ” Do Not Disturb Ecotour. At Fin Expeditions, we pride ourselves in following established best practices of Ethical Ecotourism.

Like the other manatees, the West Indian manatee has adapted fully to aquatic life, having no hind limbs. Pelage cover is sparsely distributed across the body, which may play a role in reducing the build-up of algae on their thick skin. The average West Indian manatee is about 2.7 3.5 m (8.9 11.5 ft.) long and weighs 200 600 kg (4401,320 lb.), with females generally larger than males. The difference between the two subspecies of the West Indian manatee is that the Florida manatee is commonly reported as being larger in size compared to the Antillean manatee. The largest individual on record weighed 1,655 kg (3,649 lb.) and measured 4.6 m (15 ft.) long. This manatee’s color is gray or brown. Its flippers also have either three or four nails.

As its name implies, the West Indian manatee lives in the West Indies, or Caribbean, generally in shallow coastal areas. However, it is known to withstand large changes in water salinity, so has also been found in shallow rivers and estuaries. It can live in fresh, brackish, and saline water. It is limited to the tropics and subtropics due to an extremely low metabolic rate and lack of a thick layer of insulating body fat. While this is a regularly occurring species along coastal southern Florida, during summer, this large mammal has even been found as far north as Dennis, Massachusetts, and as far west as Texas. A manatee was spotted in the Wolf River (near where it enters the Mississippi) in Memphis, Tennessee in 2006.

The Florida manatee (Trichechus manatus latirostris), a subspecies of the West Indian manatee, is the largest of all living sirenians. Florida manatees inhabit the most northern limit of sirenian habitats. Over three decades of research by universities, governmental agencies, and NGOs have contributed to the understanding of Florida manatee ecology and behavior. They are found in freshwater rivers, in estuaries, and in the coastal waters of the Gulf of Mexico and the Atlantic Ocean. Florida manatees may live to be more than 28 years old in the wild, and one captive manatee, “Snooty”, lived for 69 years.

Large concentrations of Florida manatees are located in the Crystal River and Blue Springs regions in central and north Florida, as well as along the Atlantic Coast, and Florida Gulf Coast.

The other subspecies of the West Indian manatee is sometimes referred to as the Antillean manatee. Antillean manatees are sparsely distributed throughout the Caribbean and the northwestern Atlantic Ocean, from Mexico, east to the Greater Antilles, and south to Brazil. Historically, Antillean manatees were hunted by local natives and sold to European explorers for food. Today, they are threatened by loss of habitat, poaching, entanglement with fishing gear, and vessel strikes.

When a Manatee approaches our group we remain silent and enjoy these rare and endangered marine mammals. When observing their behavior you will see definite personalities associated with these individuals, Enjoy these pictures and make some time to to go out and see for yourself.

At Fin expeditions, we are founded on the core principles of Environmental Ethics and Sustainability.
We believe that true ecotourism is an ethic, not just a marketing tool. Keeping with the principles of true ecotourism, our encounters feature passive observation and a hands off approach.

As with the Wild Dolphins we always follow the viewing guidelines that protect the Manatee established by The National Marine Fisheries Service (NMFS).

“Those who wish to pet and baby wild animals “love” them. But those who respect their natures and wish to let them live normal lives, love them more.” (Edwin Way Teale)