Skip to primary navigation Skip to content Skip to footer

The Wonder of Bioluminescence

Taking a Bioluminescent kayak tour has been a life changing experience for many people.

The darker the night is, the more amazing the aquatic light shows in the Cocoa Beach Bioluminescent region for kayak tours. The lagoons are the site of two unique and dazzling performances of bioluminescence (the emission of light produced by a chemical reaction within a living organism).

Fin Expeditions leads guided tours into the darkness to witness both.  Fin Expeditions does not take tours unless the Bioluminescent is confirmed and very bright.  They are the top rated kayak tour in the region and keep there tours small and very intimate so you do not feel rushed.

When you first step foot into the water you realize you are about to take yourself on a journey like never before.  You can suddenly bear witness to little lights glowing, and you will wonder what is to come on this amazing Bioluminescent kayak tour. As you start to paddle out, each push creates a wave of beauty like a paint brush, you can also stop and grab the water and see the Bioluminescent illumination drizzle down your arm. People have associated it with a modern day natural laser light show.  The dolphin love to play in the Bioluminescent, but it is also quite the show to see the lasers shooting in every direction as the fish cause a massive disturbance of beauty!  The living laser light show is created by one-celled, light-emitting organisms called dinoflagellates. From July through October, the Cocoa Beach area of the Indian River Lagoon is packed with the luminous organisms, often numbering more than one hundred thousand per liter of water! It is certainly one of the most amazing things to do in Central Florida, Orlando, or Cocoa Beach region.  People from all over the world come to Fin Expeditions for their world class Kayak Tours that are the number one rated Bioluminescent Kayak tours in the region.

The Beauty of Comb Jellies

During several times of the year in Cocoa Beach, Merritt Island, the Indian River Lagoon, and several other Florida East Coast areas, the  gelatinous comb jellies take over the starring role in the Indian River Lagoon light show. While commonly mistaken for a standard jellyfish, comb jellies are distinct animals named for the huge, comb-like rows of cilia running up and down their bodies structure. They are able to generate colors in two specific ways: through the bioluminescent process emitting a flashing green-blue  light when disturbed; and by refracting light through the movement of their cilia. The cilia combs act like little paddles, moving the jellies and scattering the beautiful light, which creates a beautiful pulsing, rainbow-like pattern. The end result is an underwater illumination display that is similar to what you’d see on a dinoflagellates bioluminescence kayak tour of the lagoon in summer or early fall, yet the experiences are unique and worth a separate bioluminescent kayak tour for each. 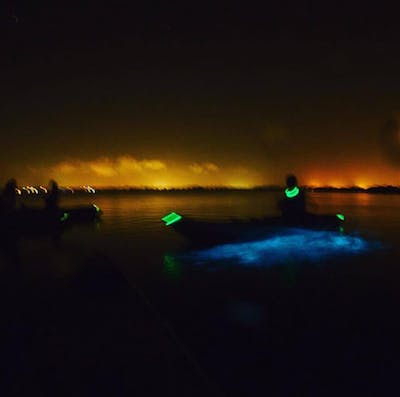 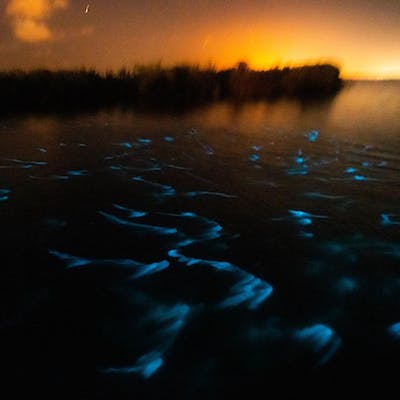