Skip to primary navigation Skip to content Skip to footer

The moment we set out there are opportunities to experience the wildlife in the lagoon. Your expedition is in one of the few key Manatee habitats in North America. Manatee, Dolphins, Osprey, Egret, Herons and Raptors are just a sample of what you may encounter.

We do not advertise different tours such as a “Manatee or Dolphin specific tours”. This is due to the fact that we do not have caged animals, we take you into the wild to view these amazing animals in their natural habitat.

We offer a relaxing 2 hour ECO kayak expedition where we hope to find all of the inhabitants of our lagoon, from birds of all types, mangrove canopies where fish hatcheries exist, to the manatee and bottlenose dolphin.

REMEMBER – MANATEES ARE OUT OF SEASON FROM NOVEMBER 15 TO MARCH 15. 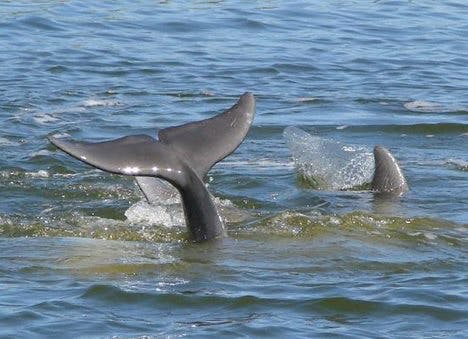 Wild dolphins live 30 to 35 years and due to their territorial nature, the individuals we see may have been around for quite some time. Imagine a dolphin you saw as a child can still be seen today. Imagine a dolphin your child sees today could be seen when he or she is a adult. A complex network of intelligent marine mammals right at our door (dock) step. Fin Expeditions Wild Dolphin sighting techniques introduces you to these marine mammals of Cocoa Beach.

Dolphins live their life in the Banana River Lagoon and have specific areas they call home. Unlike the wild dolphins in the coastal regions or open ocean, the lagoon dolphins are territorial and spend their time frequenting specific open areas in the Banana River Lagoon and mangroves of Cocoa Beach’s Thousand Islands. The connection from observing and photographing wild dolphin behavior is quite different than what you might get in a aquarium setting. The activities that Fin Expeditions provides will give you an appreciation of the uniqueness of Dolphins in the wild.

Watching dolphins in their natural environment is exciting & enjoyable.However, without due care watching dolphins may disturb or harm dolphins by introducing underwater noise, pollution or even causing physical injury, like the dolphin we call “Notch” (See Above). Undue stress to the dolphins can result in disruptions to their behavioral patterns. When considering the fact that these dolphins have specific areas of habitat in the Lagoon, Fin Expeditions feels it is essential and a necessary requirement that we follow the Viewing Guidelines established by The National Marine Fisheries Service (NMFS).

Fin Expeditions makes it our business to place you in a position to view and enjoy these dolphins in a way that ensures their wildness remains. We admire from a distance…for their safety and protection. These guys are very, very, mobile. They travel and have specific areas they hunt . These guys cover a lot of ground during their day. When we set out on expeditions we wait for them to come to us. It is amazing watching a 300lb+ wild dolphin feeding in 18″ of water. Watching a adolescent calf practicing bubble screening is so cool to see. 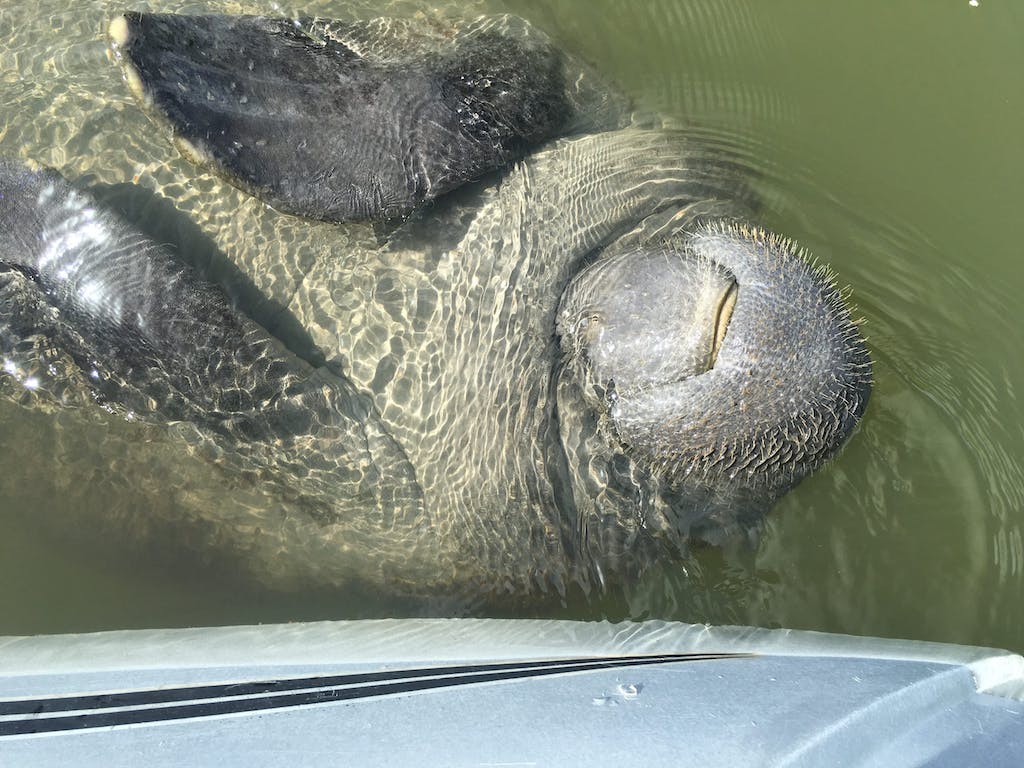 Note: Manatees are Out of season November 15 thru March 15

Like the other manatees, the West Indian manatee has adapted fully to aquatic life, having no hind limbs. Pelage cover is sparsely distributed across the body, which may play a role in reducing the build-up of algae on their thick skin. The average West Indian manatee is about 2.7 3.5 m (8.9 11.5 ft.) long and weighs 200 600 kg (4401,320 lb.), with females generally larger than males. The difference between the two subspecies of the West Indian manatee is that the Florida manatee is commonly reported as being larger in size compared to the Antillean manatee. The largest individual on record weighed 1,655 kg (3,649 lb.) and measured 4.6 m (15 ft.) long. This manatee’s color is gray or brown. Its flippers also have either three or four nails.

As its name implies, the West Indian manatee lives in the West Indies, or Caribbean, generally in shallow coastal areas. However, it is known to withstand large changes in water salinity, so has also been found in shallow rivers and estuaries. It can live in fresh, brackish, and saline water. It is limited to the tropics and subtropics due to an extremely low metabolic rate and lack of a thick layer of insulating body fat. While this is a regularly occurring species along coastal southern Florida, during summer, this large mammal has even been found as far north as Dennis, Massachusetts, and as far west as Texas.

The Florida manatee, a subspecies of the West Indian manatee, is the largest of all living sirenians. Florida manatees inhabit the most northern limit of sirenian habitats. They are found in freshwater rivers, in estuaries, and in the coastal waters of the Gulf of Mexico and the Atlantic Ocean. Florida manatees may live to be more than 28 years old in the wild.

Large concentrations of Florida manatees are located in the Crystal River and Blue Springs regions in central and north Florida, as well as along the Atlantic Coast, and Florida Gulf Coast.

The other subspecies of the West Indian manatee is sometimes referred to as the Antillean manatee. Antillean manatees are sparsely distributed throughout the Caribbean and the northwestern Atlantic Ocean, from Mexico, east to the Greater Antilles, and south to Brazil. Today, they are threatened by loss of habitat, poaching, entanglement with fishing gear, and vessel strikes. 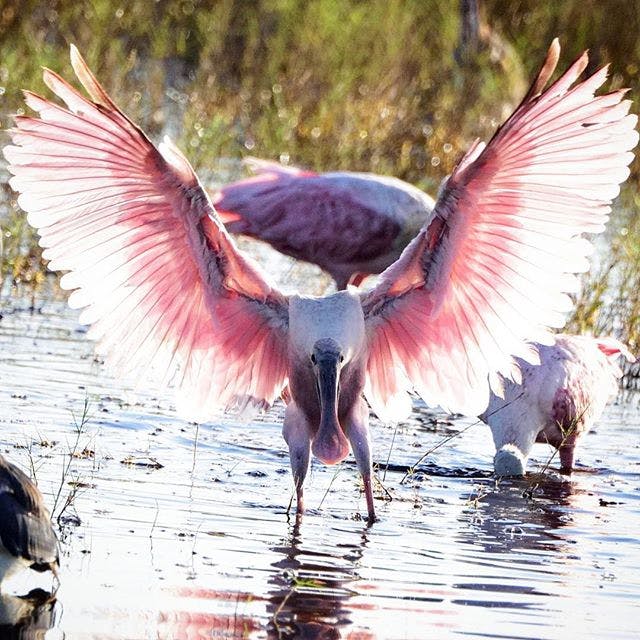 During your expedition you will see many more species of birds than you see here. We update these photos on a continual basis as it is impossible to show all. Our photos will provide a virtual Eco exploration, however the splash of the Brown Pelican, the cries of the hunting Osprey and the wind flowing through the mangroves can only be heard by going on a expedition into the lagoon Hopefully you can find the time to come with us and experience these sites and sounds.

This Big Blue was discovered and named
“Blue Nick” by Christianne, one of our astute young explorers.

Mangroves are one of Florida’s true natives. They thrive in salty environments because they are able to obtain freshwater from saltwater. Some secrete excess salt through their leaves, others block absorption of salt at their roots. Florida’s estimated 469,000 acres of mangrove forests contribute to the overall health of the state’s southern coastal zone. This ecosystem traps and cycles various organic materials, chemical elements, and important nutrients. Mangrove roots act not only as physical traps but provide attachment surfaces for various marine organisms. Many of these attached organisms filter water through their bodies and, in turn, trap and cycle nutrients. The relationship between mangroves and their associated marine life cannot be overemphasized. Mangroves provide protected nursery areas for fishes, crustaceans, and shellfish. They also provide food for a multitude of marine species such as snook, snapper, tarpon, jack, sheepshead, red drum, oyster, and shrimp. Florida’s important recreational and commercial fisheries will drastically decline without healthy mangrove forests. Many animals find shelter either in the roots or branches of mangroves. Mangrove branches are rookeries, or nesting areas, for beautiful coastal birds such as brown pelicans and roseate spoonbills.

Worldwide, more than 50 species of mangroves exist. Of the three species found in Florida, the red mangrove is probably the most well-known. It typically grows along the water’s edge. The red mangrove is easily identified by its tangled, reddish roots called “prop-roots”. These roots have earned mangroves the title, “walking trees”. This mangrove, in particular, appears to be standing or walking on the surface of the water.

This plant usually occupies slightly higher elevations upland from the red mangrove. The black mangrove can be identified by numerous finger-like projections, called pneumatophores, that protrude from the soil around the tree’s trunk Honey can be produce from the nectar the blossoms produce.

White mangroves have no visible aerial root system like red and black mangroves. The easiest way to identify white mangroves is by the leaves. The leaves are up to 3 inches long, elliptical (rounded at both ends), yellowish in color, and have two distinguishing glands at the base of each leaf blade where the stem begins. White mangroves are usually located in elevations higher and farther upland than either the red or black mangroves.

Thanks to The Banana River Aquatic Preserve for this information regarding our Mangroves.